Left my Heart in San Francisco

The wedding was so much fun but my time in California was way too short. Instead of catching my flight on Sunday night, I just wanted to drive back to my old apartment in the Marina and pretend I was still living there. Sigh. I made the most of my last day there and ate to my heart's content. I woke up a bit hungover from the wedding festivities, and made a stop at Jack in the Box for a good 'ol Breakfast Jack and hash browns. A little while later, I had some roasted pork (part of a 30 lb. pig) that was left over from more wedding celebrations. I don't think I was hungry at any point in the day!

I dropped the newlyweds off at SFO to catch a flight for their honeymoon and took the opportunity to spend a couple hours in SF. Which for me was enough to squeeze in a glass of Cakebread Sauvignon Blanc, a snack of oysters, meeting house biscuits and johnnycakes at Elite Cafe and to catch up with a couple friends. Life was pretty good. 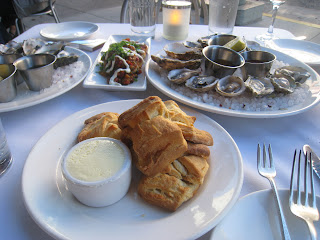 I had to try these biscuits since the cafe sold them by the dozens and frozen! They did not disappoint. 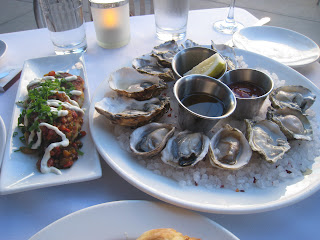 Between 4-6pm, Elite Cafe has a happy hour special where CA oysters are $1 and a few imported ones are $2 a piece. Quite a steal. A glass of Veuve is $12 and the entire wine by the glass list is discounted too! 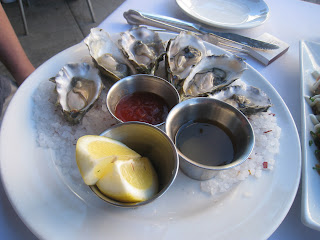