Last Friday, I ventured off the island and trekked out to Flushing for a meal with coworkers and friends. Yes, I did indeed mean to say trek because it was more than a hop, skip and jump away! Our two options for transportation were: subway/bus/walk or LIRR/walk. We opted for the LIRR despite it's slightly pricier ticket because it was supposed to get us closer to the restaurant. Let me just say the LIRR on a Friday evening is quite the poop show. I'm not familiar with certain stops only being accessible on specific cars of the train but our group had to get out of one end and sprint to the other end to be able to get off at our stop. Not quite sure why that was the case. Still doesn't make sense to me! We eventually made it to our destination, a popular Korean restaurant called Sik Gaek. My coworkers had wanted to come here to try live octopus seafood stew featured on a popular travel food show. I was weary but was curious to see everyone else try. It was an interesting experience to say the least. 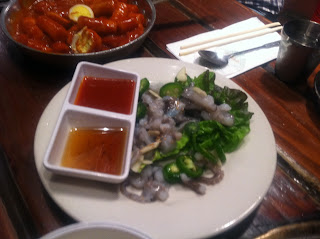 I have to admit I was really grossed out by the wriggling bits of octopus. I'm all for trying new things but this was really hard to just pop in my mouth. I let it die a bit more before I attempted. It didn't taste like much and didn't have any real flavor. It was chewy and cold. Not sure I would recommend it or even try it again.
Overall, it was a great restaurant and tons of fun to go with a big group. We had watermelon soju which was served out of a big hollowed out watermelon. It was delicious and could have led to one of "those" nights but fortunately did not. The service was very friendly and attentive. We even got a big platter of oysters on the house! 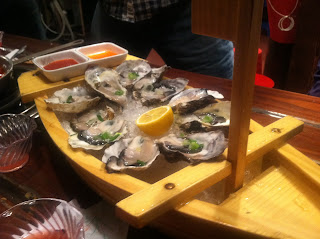 Posted by Jennifer Doan at 3:28 AM