This weekend I went fishing with my dad, brother in law and uncle. They are all avid fish-ionados (ha h) and were pretty excited that someone else in the family actually wanted to come with them. They signed us up for a chartered boat that took off from the pier at Half Moon Bay. I was pretty excited to go, although getting up at 3:30am on a Saturday is not my ideal weekend. I also had brilliantly decided to go out the night before and pretty much just had a cat nap before I had to get up again. As we were waiting for the rest of the fishermen to arrive, I was greeted with this amazing view.  For a while, I forgot how tired I was and just took this all in.


I've been in many boats on open water and have never gotten sea sick in my life. However, I do get motion sickness if I try to read in a car. A bit of nerdy info: motion sickness occurs when your eyes think you're moving but your brain does not. A side effect is nausea. To be safe though, I stuck a patch behind my ear that was supposed to help. The water was pretty lumpy with huge swells everywhere. At first, it was fun--sort of like a rollercoaster. After about half an hour, I started to feel like I do after a night of too many drinks. Perhaps it was pride, but I refused to be the sissy girl that got seasick. Instead of sitting in the covered cabin area on the boat, I stood outside shivering in the wind, taking in fresh air and keeping my eyes on the horizon. A couple hours later, the nausea subsided and could actually enjoy being out on the water.

The captain led us to several areas where the sonar showed a lot of fish activity. I always thought fishing was simply putting some bait on your hook and waiting for fish to gobble it up and hop onto your hook. Boy was I wrong. It seemed like everyone around me was catching something and I didn't even have a nibble. I did manage to break my line four times by getting it stuck on the rocks at the bottom. After some assistance, I finally caught my first blue rock fish.


It really was worth it for t his one fish. I felt so proud. I caught another one after that, but it was too small so we threw it back. Oh, I also caught a starfish. Who does that?! I really had to laugh at how bad I was at fishing. I would completely agree with those that call it a sport. I suck at every sport there is out there so it makes sense that I would be bad here as well. Luckily my family is much better than I am and they caught plenty of fish for us to take home including a sand dab and several species of rock fish.

Dungeness crab season just started and it was the first day that non commercial fishermen were allowed to catch them. The shells are a bit soft still so commercial fishermen have to wait until it's thicker. I loved this part because I didn't have to do anything besides count the crabs. The crew planted crab pots all over and they simply had to pull them up and see how many they caught. 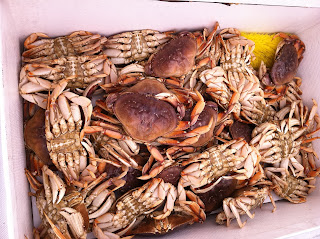 Can you believe the size of these crabs?! Everything I endured until this point was worth it for these guys. I was already planning my menu! There is a limit of 6 crabs per person. We didn't hit the maximum but still took home 4 a piece.

So what did I do with all this super fresh seafood? Stay tuned....
Posted by Jennifer Doan at 10:44 PM