I visited Plow for brunch a couple weeks ago, but have been too busy eating to write about it. I first noticed the restaurant while walking around the Potrero Hill area. I was immediately drawn to the space. There was an open kitchen with counter seating---my favorite place to sit. Huge windows let in a ton of light and there was a crowd of people waiting to be seated....always a good sign. My friend and I arrived at noon on a Sunday and was told it would be about an hour wait. We grabbed some coffee, sat on a planter around the corner, and waited. Go early if you're not the patient type. Eventually we snagged two seats at the counter. As chefs, we were so engrossed in watching the kitchen crew do their thing, we took a long time to decide what to order. It's fascinating to watch cooks during brunch. Their speed and efficiency is amazing.We both ordered entrees and then some, in the name of research, of course. 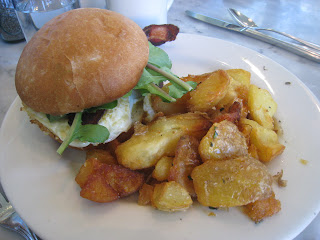 We ordered the fried egg sandwich which comes with aioli, greens, Vermont cheddar on a Acme bun. We added Nueske bacon and avocado, naturally. Their twice cooked potatoes are supposedly famous. They are indeed crispy, but the irregular shape bothers me. The sandwich was quite tasty and quite large. Definitely large enough to share. 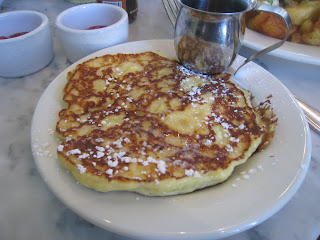 We ordered a side of lemon ricotta pancake since every table had ordered it and it's considered one of their specialty items. I was underwhelmed and thought it needed to be a bit sweeter. 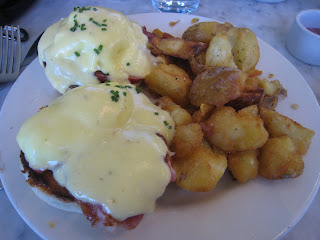 I never order eggs benedict, mostly because it's almost always made ahead of time and reheated. How appetizing does a poached egg that's been sitting around for 20 minutes sound? Blech. However, since this was an open kitchen and we could clearly see them making the eggs to order, and the hollandaise was made with fennel pollen, we decided to try it. It was a typical benedict. Nothing special and not something I would order again.

Overall, Plow is a good brunch place. Looking at the menu now and seeing the changes, I would like to go back and try some other items. It's a good, cozy brunch but didn't plow (hehe) my mind. Although, It takes a lot to impress me for brunch. You can only do so much with eggs.