On Sunday night, Eric and I had a cooking adventure with his new pasta maker. We decided to make wild mushroom ravioli...from scratch. Definitely a first for me. I wasn't able to find one single recipe I liked, so I decided to wing it and combine ingredients from various ones. 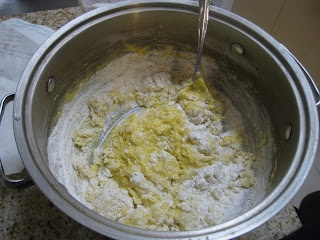 We began by making the pasta...which was a bit disastrous because we didn't follow the recipe correctly, forgot to put dry ingredients before wet and added salt! Instructions from the pasta maker specifically said to not add salt..as we later discovered. Whoops. 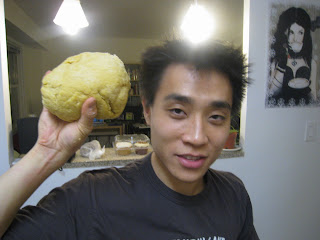 Using our extensive pasta making expertise, we somehow saved the dough. While the pasta rested, I made the mushroom filling. I'm not sure why pasta needs to rest. It probably has to do with all the abuse it takes during the kneading process. All I know is that it was a lot softer and smoother after 30 minutes in saran wrap. 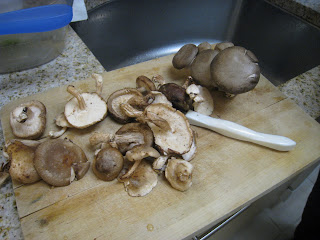 We had selected several types of mushrooms at the store: cremini, portobello, shiitake and royal trumpet. 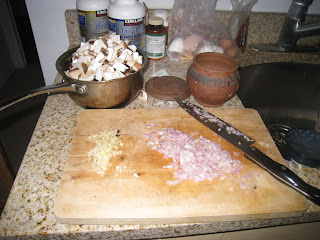 I chopped the 'shrooms along with garlic, shallots and basil. I made sure to finely mince the garlic since I didn't want to bite into huge chunks of garlic. Adding some salt to the garlic and mashing with the flat blade of the knife helps draw moisture out of the garlic and form a paste (a neat trick I learned from my mom). 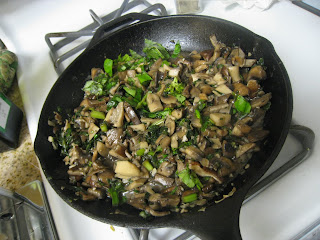 I cooked the mushrooms and shallots with some olive oil, then added the garlic, basil and salt and pepper to taste. I allowed the mushrooms to cook down and the moisture to be drawn out. It's important to drain as much of the liquid as possible so the ravioli filling is not too wet. I don't have a picture, but once the mushrooms were done, I combined with ricotta cheese, Parmesan cheese and some fresh basil. 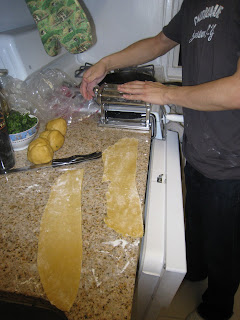 As I worked on the filling, Eric was rolling out the dough for the ravioli. It's a bit tedious to keep rolling the dough thinner and thinner, but Eric did a great job! Each strip of dough had to go through the roller 8 times. I would have stopped about halfway because the thinness of the pasta was making me nervous. 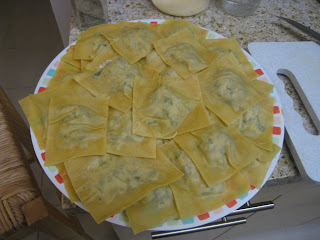 We assembled the ravioli and I have to say I think it looked like real ravioli! Aren't they cute?? 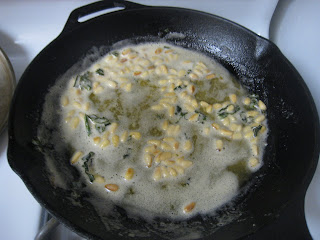 While the ravioli cooked, I got started on the brown butter sauce. This was the first time I made brown butter sauce and I think it turned out pretty well. Brown butter is simply butter cooked until it becomes brown (not burnt) and a teensy bit thicker in consistency. I first toasted pine nuts in a pan with olive oil. Then I cooked a few tablespoons of butter over low heat, added chopped basil, the toasted pine nuts, Parmesan cheese and salt and pepper. The butter is nutty, the basil is crispy and the combination creates a delightful, delicious sauce. I would highly recommend to make this sauce with any kind of pasta. 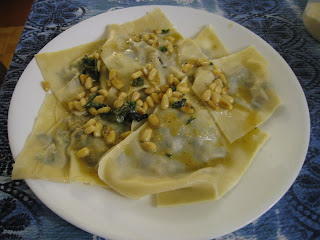 Posted by Jennifer Doan at 8:45 AM