Today's lesson was a biology flashback...I learned all about shellfish...lobster, mussels, scallops, oysters and clams. I'm pretty familiar with eating/cooking shellfish except for lobster. I've never prepared my own lobster. It was pretty scary for me to work with a live, moving, thing on my cutting board. To top it off, instead of simply boiling the entire lobster, the recipe called for breaking it into pieces. Yes, I killed a lobster with my bare hands. I ripped off the claws, then the tail, then chopped up the midsection. I have to admit I did grit my teeth and look away a few times. Lobsters don't die instantly so there was still some movement even after I ripped it apart. 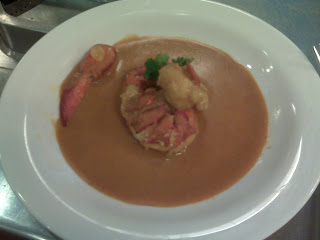 But it was worth it! This is lobster a l'americane which is poached lobster with a sauce made from it's shell and some aromatics. It was pretty yummy, but how can you really go wrong with lobster?? 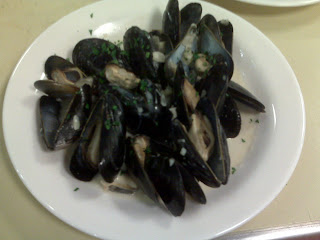 This is Moules a La Mariniere or steamed mussels with white wine, shallots and parsley. Pretty easy dish to make. 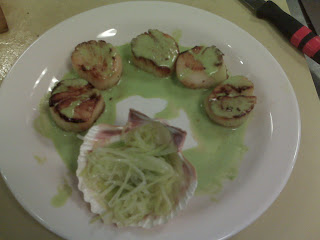 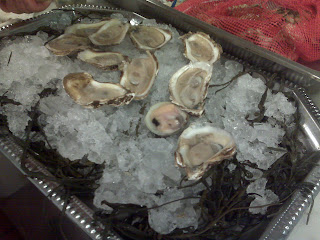 The day ended with an oyster/clam shucking lesson, which also meant a refreshing afternoon snack!
Posted by Jennifer Doan at 3:44 PM