Today's class was the first day of the nutrition segment so we made a relatively healthy bass and lentil dish (very little butter and only a teensy bit of bacon) followed by a lecture on nutrients. It's weird to be cooking again after so many days of pastry...I feel oddly rusty. Filleting a fish isn't exactly the easiest way to jump back into cooking either. There really isn't much room for error. I got back into the swing of things in no time though.

I had to gouge out fish eyeballs with a melon baller so the bones could be used for fish stock....probably the grossest thing I've had to do since I started school. I would even put it above killing a lobster with my bare hands. I had to actually look away as I scooped...and the eyeball fell out of the surrounding socket. BLECH. 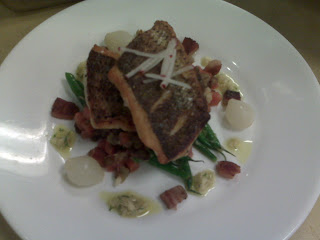 After class, I went to a Belgian beer tasting put on by th wine club and Maggie Fuller of Beer Ethos. I really didn't want to drink again after my gluttonous weekend, but the tasting turned out to be really educational and fun. I tried a bunch of beers I've never tasted before and discovered I like "funky barnyard" beers. Maggie was a great lecturer and clearly knows a ton about beer and everything related. 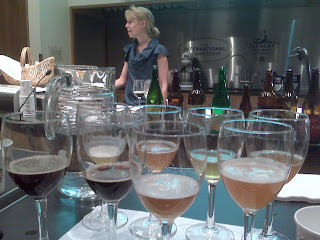 Posted by Jennifer Doan at 5:35 PM