I don't usually go to Harlem. Nothing against the borough...it's just FAR. However, some Bay Area friends were in town and I deemed that a special occasion enough to make the trek uptown for some BBQ deliciousness at Dinosaur BBQ. I have never been there before and really wanted to check it out. Getting to the restaurant took well over 45 minutes! This includes the time I got semi-lost and ended up hopping in a cab, of course. They were running behind and my party ended up waiting forever to sit down...we passed time at the bar. Eventually we sat and proceeded to order EVERYTHING on the menu. 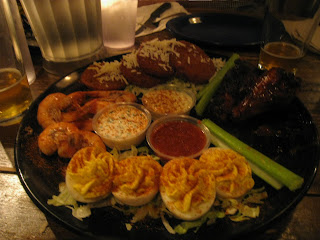 This is the appetizer sampler for 4 which comes with (from top left): fried green tomatoes sprinkled with Pecorino Romano cheese, chicken wings, deviled eggs and spicy shrimp boil. I liked the fried green tomatoes the best...probably because I slathered it with the cayenne buttermilk ranch dressing. 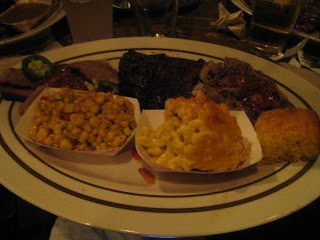 Instead of doing the sensible thing and sharing combo platters, we all ordered our own. I ordered the Tres Hombres which came with Texas beef brisket, Bar-B-Que ribs, Bar-B-Que pork, honey hush cornbread and my choice of sides....I chose cajun corn and mac n' cheese. I didn't like the brisket much, but the ribs were tender and the pork was pretty tasty, although I've definitely had better. I slathered everything with the hot BBQ sauce so it all tasted great at the time. The cornbread was on the dry side, but the cajun corn was addicting! 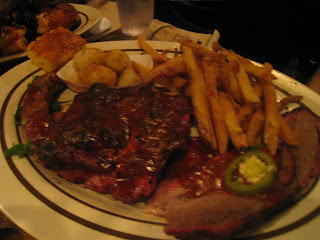 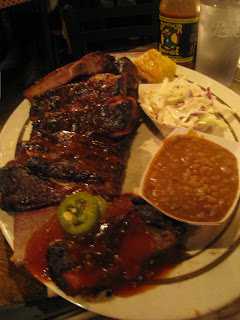 Both Ant and Joo ordered the Sampler Supreme, which came with 1/2 chicken, 1/2 rack of ribs, Texas beef brisket, honey hush cornbread and two sides. The chicken was a bit plain...it just tasted like rotisserie chicken with some BBQ sauce on top. I was disappointed. 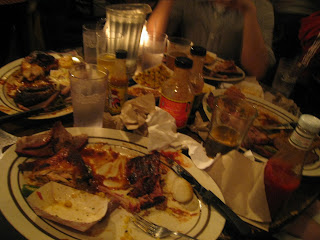 I don't know what we were thinking ordering so much! There was well over 2 lbs. of leftover meat. None of us could finish our plates, but we did try! I'm glad I tried this place, but I don't think I would go back. There are several other BBQ joints I want to try before repeating a place I thought was just ok.