I Left My Heart (Stomach) in San Francisco 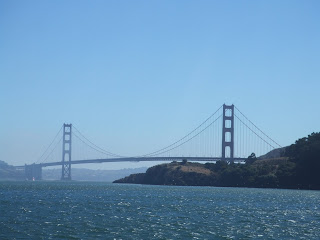 I flew back home to the Bay for a long Easter weekend of food, friends and family. I realized as I was looking through the pictures I took on my camera, I have 3x more pictures of food than people! I really need to work on a better balance.

My food adventure began as soon as I landed at SFO late Thursday night. Having forgotten to pick up dinner during my layover in Chicago, I was starving. Unfortunately, SF doesn't have a huge selection of late night quick bites. After driving by a closed taqueria near Tina's apartment, and a closed Nick's Crispy Tacos and a closed Taco Bell (wth? isn't their slogan all about the 4th meal?), I ended up grabbing a slice of Hawaiian pizza at Pizza Orgasmica in the Marina. It was delicious, but not as good as it would taste at 3am...after a few drinks.

The next day, Tina and I had lunch at La Mar Cebicheria Peruana, which is located along the Embarcadero next to the infamous Ferry Building. I had heard great things about this place and was eager to try it...this is the first US outpost. There are several locations in Peru. 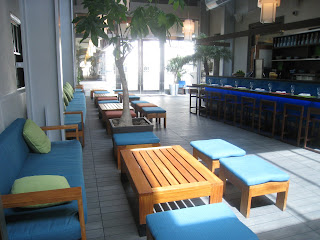 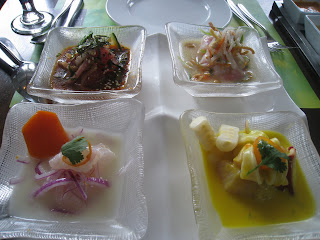 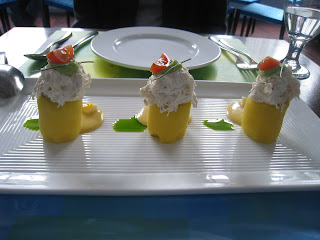 I knew we were over ordering with three dishes, but I couldn't resist this causa appetizer when I saw it on the menu. Causa is traditional Peruvian whipped potato with aji amarillo and seafood or vegetarian toppings. This particular one is causa limena...Dungeness crab, avocado puree, quail egg, cherry tomatoes, aji amarillo Huancaina sauce wit basil cilantro oil. The crab meat and avocado went extremely well with the whipped potatoes, but I thought it needed a little more salt. I also didn't really want to eat more than one tower. 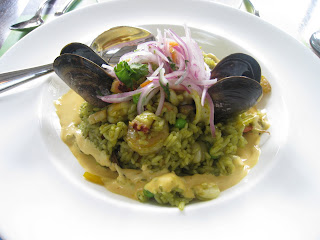 I didn't really have the stomach space, but Tina insisted I try the arroz norteno....which was pretty much similar to a seafood risotto. I would describe it more like a risotto than paella, simply because it very creamy, which is characteristic of a risotto. 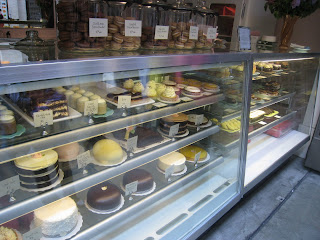 Because I have to end all meals with something sweet, we wandered over to Miette Patisserie in the Ferry Building. The cakes and desserts were exceptionally pretty and dainty, almost too pretty to eat! 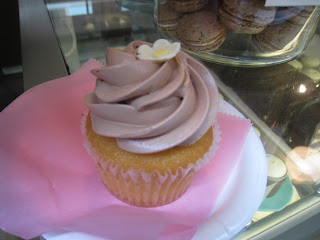 Almost, but that didn't stop me from devouring this yellow cupcake with chocolate buttercream frosting. The cake was on the dry side but the frosting was just right. 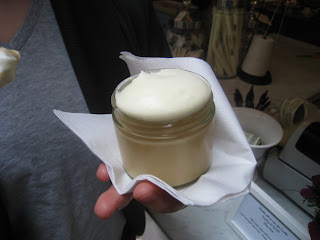 I convinced Tina to get the caramel panna cotta and she was definitely glad she did! It was SO GOOD. I would say it tastes more like a pot de creme than panna cotta....smooth, creamy, not too sweet. Plus, you get a dollar refund for returning the jar!


Later that night, I met up with a few friends for dinner at The House, one of my favorite asian fusion places in the city. We had a large group so I got to try many of the dishes on the menu. I haven't been to The House in well over a year, but I was happy to see it was just as crowded as usual and the food was still just as good. 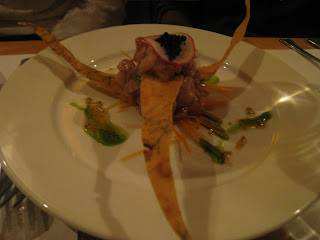 We shared appetizer of ahi tuna tartare with roasted nori chips. This dish was good, but pretty standard as far as tuna tartare goes. It would have been better spicy. :) 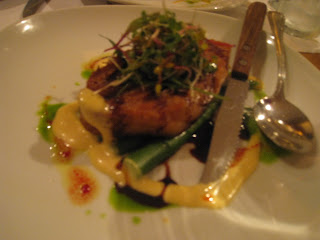 A special appetizer with my favorite part of the pig....pork belly! I think it was served with roasted asparagus, but I really only remember the crispy pork belly. 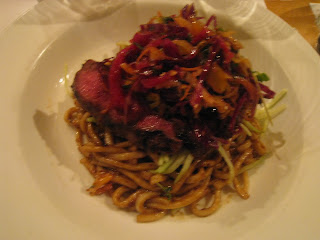 I ordered the warm wasabi noodles with Angus flatiron steak. The portions are enormous so I happily shared this with all the hungry boys at my table. I liked my dish a lot, the steak was cooked perfectly medium rate and the noodles only had the slightest hint of wasabi. 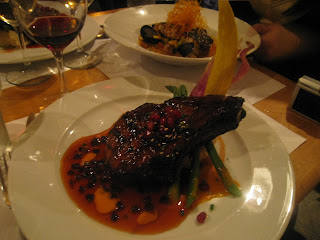 Tina was raving about the Niman Ranch pork chop with pomegranate currant sauce and I have to admit it really was tasty. The pork chop wasn't dry or overcooked like so many pork chops are. The sauce was sweet and really complemented the meat. 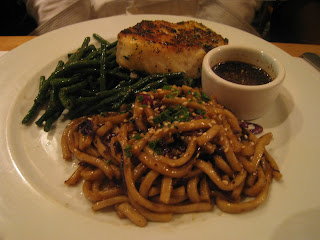 I also loved the grilled sea bass with garlic ginger soy. The bass was perfectly cooked and silky soft and moist. It literally melted in my mouth. I kept stealing bites off of Anthony's plate. 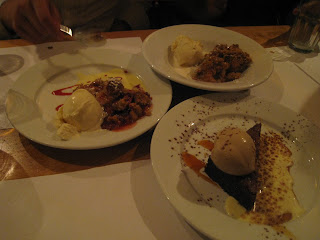 And of course, the meal ended with several desserts. I loved the strawberry rhubarb cobbler with vanilla ice cream the best. 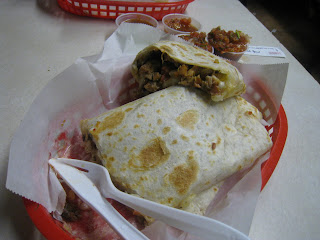 Since I'm not in SF that often, I had to fit in a 4th meal at El Farolito later that night. I wasn't remotely hungry, but I just had to have some real Mexican food (NY really just doesn't compare.) I ordered a steak quesadilla and Tina ordered a chicken quesadilla. We had to wait forever, but it was totally worth it. 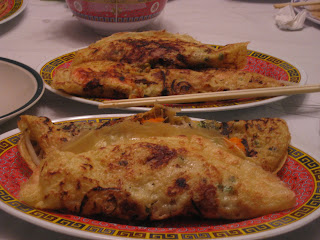 The next day I went home to San Jose and had a delicious home cooked meal courtesy of my mom. She made banh xeo, a Vietnamese batter based omelette filled with shrimp, pork, bean sprouts and mung beans, served with fish sauce and lettuce and greens. I really have been spoiled because my mom is such a great cook. It's hard to eat Vietnamese food anywhere else but home, even Vietnam! 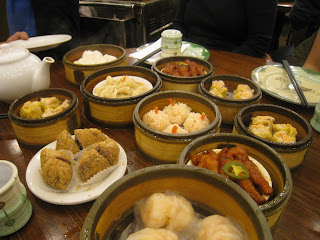 I couldn't leave San Jose without a quick meal of dim sum at Hong Kong Saigon Seafood Harbor Restaurant. This place has a ridiculous wait, but we came for the famous taro buns (not pictured.) For some reason, I think the dim sum in the Bay Area is so much better than anything I can find in New York's Chinatown. 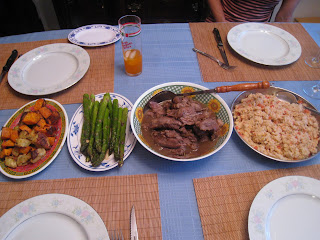 Right before I left, I whipped up a meal of braised lamb shank, couscous, roasted asparagus and roasted sweet potatoes for my family so I could show off some of my new culinary skills. I am happy to say they liked the lamb (or so they say) because it wasn't lamb-y or dry. I love introducing new foods to people. I'm a firm believer that tastes can be acquired for anything.

I definitely had a great food packed weekend, but it's good to back in New York.