I checked out the newly opened Colicchio & Sons, which is in the space of the former Craftsteak. Located on tenth avenue, this restaurant was quite out of the way. I sat in the Tap Room, rather than the main dining room. It is cheaper, requires no reservation but has a different menu. I went early ay 6:15 hoping to beat any crowds. I actually had nothing to worry about because the Tap Room was pretty empty. 6:15 is really early to eat dinner by New York standards. 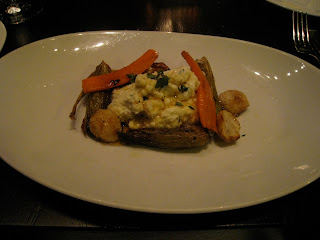 I shared an appetizer of fresh ricotta, roasted root vegetables and truffle honey with my dining companion. The kitchen actually split the appetizer for us, which I loved. I really liked this appetizer. It was simple and delicious. 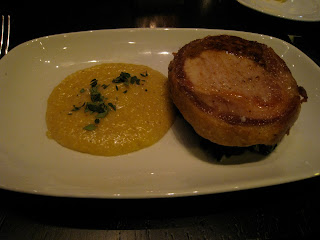 I ordered the porchetta entree which was a pork chop wrapped in chorizo, served on a bed of swiss chard and a side of polenta. The porchetta was nicely cooked but I didn't like the chorizo wrapping. It didn't add anything to the dish. 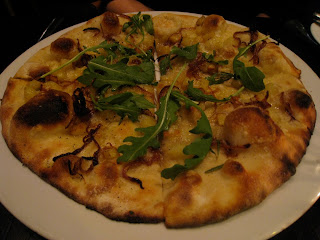 I also ordered the pizza with red onion, fontina, potato and rosemary. I thought it would be amazing given that the restaurant has an enormous pizza oven, but it was just ok. I think I would have liked it better with some sort of tomato sauce. 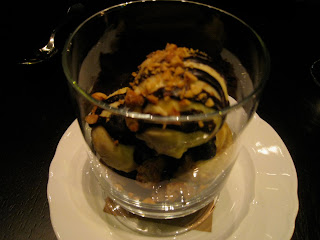 For dessert, I had a peanut butter parfait, which was quite tasty. The portions were not enormous so even after dessert, I didn't feel like I was going to burst.

Perhaps the highlight of the night was seeing Tom Colicchio himself walking around the restaurant. I didn't get to meet him or take a picture but it was still great to see a celebrity chef!

Email ThisBlogThis!Share to TwitterShare to FacebookShare to Pinterest
Labels: Colicchio and Sons