I tried Satay Junction on Friday, an Indonesian street food place that recently opened. I went with a friend who is from Indonesia to verify the authenticity of the dishes (and to not embarrass myself when trying to pronounce the names of the dishes.)

I somehow managed to not get lost finding the place. Something about the West Village always gets my sense of direction turned backwards and sideways. It's like the Bermuda Triangle of New York. But the food stars were aligned, and I managed to get there in good time. The restaurant itself is tiny and narrow--it really is like a junction/passageway. Such creativity!I thought the food was pretty good and the service attentive. They don't have their liquor license yet so it's still BYOB right now. I wish I had known that beforehand! My only real complaint was that the table was too tiny to hold all the food! 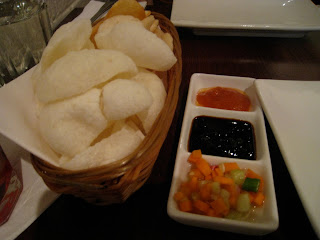 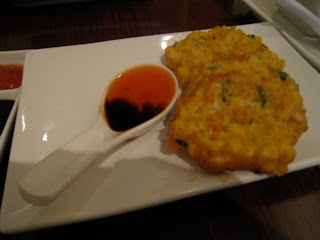 This was a special appetizer--corn fritters with a spicy sweet dipping sauce. I really liked these. There were real corn kernels inside! 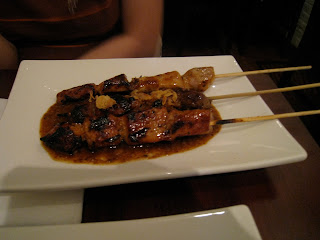 The restaurants namesake--satay! According to my friend, only lamb, pork and chicken are served on the streets of Indonesia. The menu had a lot of other options but we stuck to those three. I liked the lamb the best. Pork is just not good on a stick. And chicken was chicken. 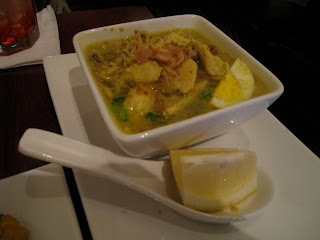 This was the soto ayam soup with vermicelli. It was a nice flavorful chicken, lemongrass broth. Very light. 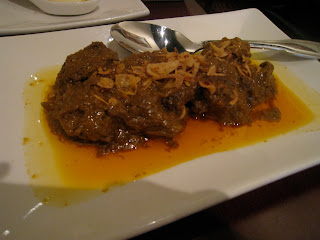 I forgot the name of this dish, but it was a special. Beef braised in coconut juice I think. Very tender and slightly spicy. It didn't really wow me. ( If it did, I would be J-WoW. :))

Satay Junction also delivers! I'd go back for sure. Check it out!