I attended Fashion Night Out Black Carnival last Friday on a whim after reading about it in one my many daily food/drink/nightlife emails. I envisioned carnival games, free food from Bond St. and free flowing vodka as it was described in the email. I got spruced up as much as I could muster (looking cute and fashion forward haven't really been priorities the past couple of years) and headed over to Bond street. It was much different than I thought but still pretty cool. Unfortunately, Bond street is cobblestone, which is a nightmare to walk on in heels. There were a few booths, one sake bottle ring toss game, interesting carnival performers and fashionistas everywhere! I was underwhelmed but the food options made up for it. 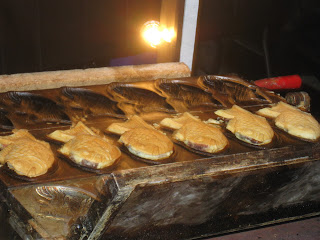 I haven't eaten one of these delightful Japanese fish, called taiyaki since I lived in San Francisco. One of my favorite routines was to head to Japan town, have some ramen from Sappora-Ya and then pick up one of these guys from a place inside the Japan town center. I generally like red bean, which I think is the traditional way taiyakis is eaten, but I decided to try sausage and cheese tonight. It tasted like a hot dog with cheese in a waffle bun. I think my fondness for taiyaki made up for any mediocrity because I loved it anyway. 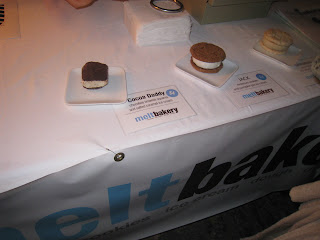 I saw these ice cream sandwiches from Melt Bakery even before the taiyaki but waited to come back for it for dessert. Melt Bakery has been on my list to try. I believe they have a stand at the Hester Street Fair, so I could not pass it up when it was so convenient. I chose a sandwich with molasses cookies and pumpkin pie ice cream. Unfortunately it was stored on dry ice and was hard as dry ice and not edible for nearly half an hour. I can think of few things worse than staring at an ice cream sandwich, willing it to melt faster. Can you?? 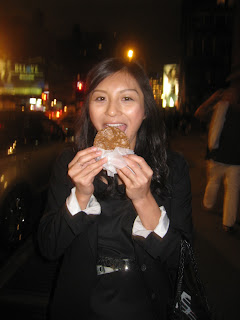 After some wine and a light dinner at nearby Noho Star, I finally got to eat my sandwich. Success.
Posted by Jennifer Doan at 4:48 PM