When people learn that I cook for living, they often ask if I cook a lot at home. I used to be a bit embarrassed to admit that I really don't cook much when I'm not at work. After 8 hours on my feet in front of a hot stove, the last thing I want to do is spend any more time than 20 minutes throwing together a dinner for myself. I will cook when it's for/with friends but when it comes to feeding myself, I have very low standards. I'm talking about sandwiches, salads, quick pastas, stir fry or even sometimes just hummus and pita (I'm obsessed with hummus.)

Yesterday, however, I spent 4 1/2 hours in the kitchen experimenting with pumpkin recipes and hardly noticed how much time had passed. I could go as slow as I wanted, make a mess and just enjoy what I love. Jeff had a giant pumpkin leftover from Halloween that we never got around to carving and I've never cooked with real pumpkin before so I couldn't not give it a go. After some pumpkin research, I learned that there is a smaller sugar pumpkin variety that is sweeter and better for cooking than the giant beast I had. I used it anyway and bought a smaller sugar pumpkin for my pie just to see the difference in taste. I decided to make pumpkin soup, pumpkin ravioli and pumpkin pie. 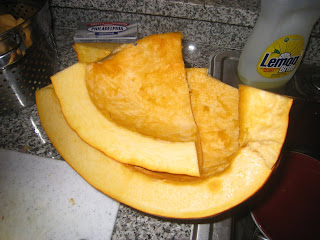 Raw pumpkin massacred....I should have taken a picture of the whole pumpkin before I chopped it up. 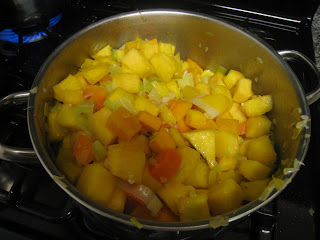 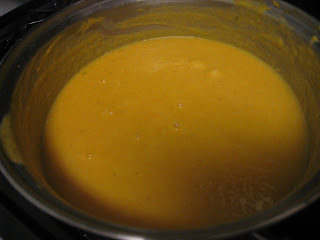 A few turns in the food processor, a touch of cream and butter and voila---pumpkin soup! 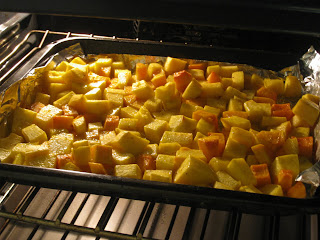 Roasting pumpkin and butternut squash for my pumpkin ravioli filling. I pureed the vegetables, mixed in some ricotta, mascapone cheese, cinnamon, nutmeg and ground ginger. Forgot to take a picture of the finished product but I used wonton wrappers instead on fresh pasta since I don't have a pasta machine and it tasted fine. I cooked them in boiling water than sauteed in brown butter with sage. It was quite delicious. Thankfully I have tubs of extra filling in the freezer to make more later. 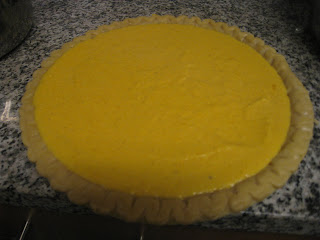 Pumpkin pie! The filling has pureed roasted sugar pumpkin, cream cheese, sugar, egg, cinnamon, nutmeg and ground ginger. Unfortunately the pie crust is not home made. I don't have that much time on my hands! It tasted delicious with whip cream! :)

No more pumpkins for me. I'm pumpkined out. Finito.
Posted by Jennifer Doan at 1:27 PM

Email ThisBlogThis!Share to TwitterShare to FacebookShare to Pinterest
Labels: pumpkin