My Milkshake Brings All the Boys to the Yard

I recently tried the toasted marshmallow shake from Stand. It was featured on the Food Network's Best Thing I Ever Ate--Sugar Rush. I have to say, it was every bit as delicious as it was described to be. I had decided to reward myself dessert after a healthy sushi dinner at Nori. Despite being completely full, I polished off more than half of the full size shake and also some of two mini shakes (chocolate peanut butter cup and Mint Cookies and Cream.) In my defense, I didn't want to order three shakes but my dining companions ordered while I was in the bathroom and decided it would be a good idea. Dairy in large quantities is never a good idea but I just couldn't stop drinking. There were bits of marshmallow in the shake along with two jumbo toasted marshmallows on top. Heaven. Doesn't it seem fitting that heaven would be a place where you surrounded by toasted marshmallow shakes and jumbo toasted marshmallows?? 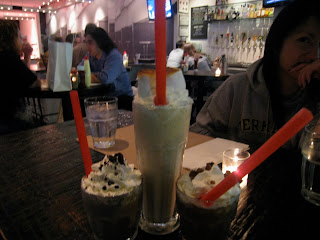 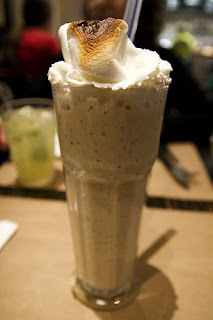 Marshmallows hold a soft spot in my heart. It's one of those nostalgic foods that brings be back to beach side campfires in high school and more recently, a gloriously fun trip to Cape Cod last summer.

I can't wait to go back for another sip of heaven!