I haven't gone home for Thanksgiving ever since I moved to New York. I do miss spending it with my family, but airfare around this time is ridiculous and just not worth it since I always go home a month later for Christmas. Usually I spend it with other stranded friends, but this year I went with the bf to his hometown outside Massachusetts to spend it with his family. Fortunately, I was coming as a guest so I didn't have to do any cooking but it didn't feel quite right to not make anything, so I insisted on making a soup as an appetizer. I chose to make a chestnut truffle soup, inspired by the amazing soup I had at Tinto in Philly. I thought it would be an easy soup--particularly since I assumed frozen peeled chestnuts would be readily available in stores. They were not. I didn't have time to pick up the ingredients myself to find an alternative so I ended up with 5 lbs of fresh chestnuts. Chestnuts are delicious but they are also the biggest pain in the ass to cook and peel. 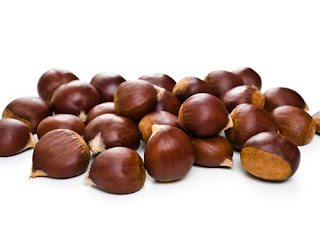 We were up to the wee hours of the morning, peeling roasted chestnuts. After that was finally done with, the soup had to be pureed but there was only an older food processor to use which didn't get the soup smooth enough. Trying my best to improvise, the soup was strained through several colanders. But still, the stubborn soup remained chunky. Finally the next day, I got access to a blender and was able to puree the soup to its creamy potential. The soup was a hit at dinner (probably from the blood, sweat and tears of peeling the damn chestnuts), but I'm not quite sure it was worth the trouble.

I retold the story to my sister the next day, who reminded me of a stuffing recipe I had insisted on making several years ago which required her to peel chestnuts as well. Oops. Apparently, I love chestnuts. And challenging recipes.
Posted by Jennifer Doan at 12:21 PM

Email ThisBlogThis!Share to TwitterShare to FacebookShare to Pinterest
Labels: chestnuts